When considering radio communication solutions, many business owners may be discouraged by their stereotypical bulky exterior, suggested limited capabilities and old-fashioned, inconvenient antennas. This design is a thing of the past, with modern radios encapsulating sleek and sophisticated design, with top-of-the-range radio technology.

Many are now opting for two-way radio models, as their durable designs enable cost effective, reliable and clear communications that do not rely on services, aren’t affected by long distances, and can withstand highly challenging environments. So, what are the top benefits and other advantages of two-way radio communications?

Most importantly, when communicating, seamless call clarity is the top priority. The use of two-way radio models eliminates the risk of low-quality calls from surrounding interference that is sometimes experienced in mobile communications that rely on service connection.

Two-way radios have been created with this clarity in mind and integrate premium technology to minimise interference. This ensures clear and efficient communications across large distances, troubling terrain and in critical conditions.

Commonly, personal phones rely on these unpredictable service capabilities, and as a result, connection issues are a huge hindrance when it comes to communication by internet and phone service. Unlike landlines and mobiles, the use of radio frequency systems mean that two-way radios also offer huge flexibility advantages. These radio waves are transferred through the air and are highly adaptable, as they can be directed through reflection and retraction.

Unlike mobile phones which are made slimline and often entirely of premium glass materials, two-way radios are built to last and to withstand industrial use. This means that exposure to extreme temperatures, drops from great heights and immersion in water poses no threat to the durable models. Many models are also made with Ingress Protection (IP), which ensures that the devices are dustproof for use in the desert or poor visibility environments. With two-way radios, communication, even in the toughest of environments, can still take place.

Whilst many phones come with limited warranty, as two-way radios are built to withstand these tough environments, they are built to last. This means that in the long run they do not have to be replaced as frequently as mobile phones, and therefore save businesses cost in the long run

As previously mentioned, radio models do not have to be replaced frequently due to their durability. Not only this, but due to the use of radio frequencies, no monthly service payment is required to keep these models running.

Not only does the lack of service mean less payments to enable functionality, but due to the absence of service requirements, radio frequency systems mean that non-service zones are not an issue. This means that radio communications can stretch across large distances and therefore widespread communication is prioritised

Enabling communication at the touch of a button, two-way radio models are perfect to facilitate ease of use. Many models feature large interfaces and coloured light signalling for use in compromising areas. These features, amongst other model-specific features, pose two-way radio solutions as an effective and simplistic way to communicate over large distances using advanced radio frequency systems.

Gone are the days of heavyweight models and ill-thought design. Two-way radios have adapted with communication functionalities and requirements, and are often small, light-weight and portable to enable communication wherever the user is. This lightweight nature ensures that personnel’s work capabilities are not impacted by the requirement to carry heavy-weight equipment, and can be used in a range of environments as a result

Many radios are also created with internal functions to communicate urgent alerts, such as “Man-Down” for example, to alert everyone on the frequency that an emergency has occurred. This alert is instantaneous, doesn’t require the checking of a pager or similar device, and ensures that the affected party is assisted as soon as possible. These safety features are hugely important for many personnel that might utilise two-way radio systems and prevent and minimise disruption and casualty as much as possible.

There is also an almost universal ‘radio speak’ language, that enables short and clear messages to be communicated quickly across radio, for example:

This is used to inform a receiver that a message or action will shortly take place, and to not make any communications as these may overlap and be subsequently missed.

This is used intermittently with “Affirmative” – both of which signal that the receiver has understood the communicated message and will act upon the command if necessary.

Due to the radio frequencies and signalling that two-way radios are based upon, multiple people can engage in a single conversation at one time. By programming a group of radios to the same frequencies, two-way radios facilitate group functionality, which is great for teams from a range of industries such as the military, the emergency services, security teams and even in schools and retail settings.

The option to enable group functionality is not only highly convenient, but this is also time and cost effective. In the time that you can communicate your message across the frequency to the group, this, in the case of mobile phones or other communicative devices, would only cover the length of time required for one phone call. This cuts calling time and service costs by a huge degree and therefore facilitates a more efficient working environment.

The average battery life of mobile devices, especially if used consistently and over a long period, is drastically short. This creates unreliable communications for personnel and means that the devices they use to communicate are often out of use whilst charging. Not only does this increase the costs of a business, as multiple devices are required to be purchased to ensure the communications are covered even during these down times, but also means that devices are charged much more frequently than if they were being used for personal use – often leading to replacement batteries being needed, and therefore more cost.

Two-way radio battery life, however, has drastically increased in recent years. Some models maintain a battery life of over twenty-four hours, meaning that the same radio can be used on multiple shifts by multiple people without having to account for charging time – saving on time and costs.

Unlike mobile phones, it is technically legal to use a two-way radio whilst you are driving – as long as you place proper focus on the road ahead of you. This is great for emergency services, for example, who need to make critical calls whilst driving at speed, and so require a model with these capabilities.

Using two-way radios rather than mobiles on the roads eliminates a huge danger not only for the users of the radios, but also everyone using the roads at that time – providing a great alternative for these users.

Some two-way radio solutions available at Minerva include portable models such as the MOTOTRBO SL 4010e, MOTOTRBO DP3441e, Applications to provide radio services such as Smart PTT and TRBOnet , as well as TETRA technologies, that includes the MXP600 and ST7000. Many portable models offer Bluetooth connectivity, location tracking, integrated WiFi and a full-range of safety features.

Overall, two-way radio models present a huge number of benefits to those in business or those working in difficult terrain. With a wide range of models to choose from here at Minerva we can discuss your needs with you to find the perfect model. For a full list of available two-way radio solutions, get in touch with us now 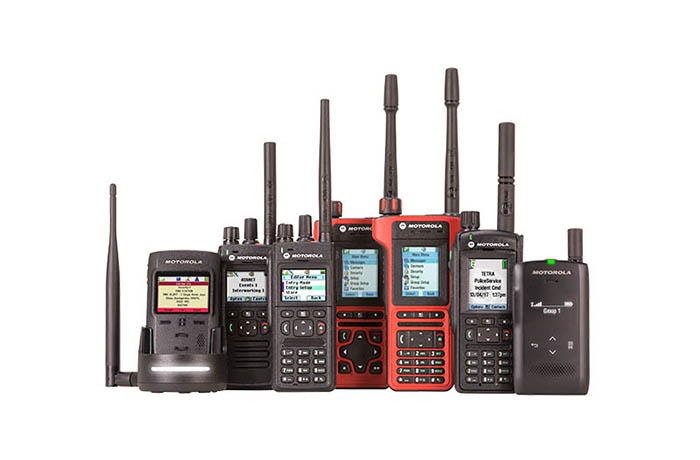